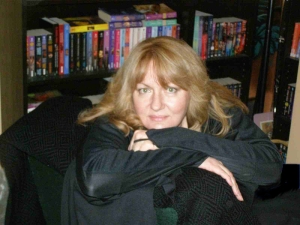 Well let’s see, what might you want to know about me?

Well, first off, I’m married to my own hero. One who’s kind of shy so rather than tell you his name, we’ll just call him the ‘Alpha-muffin’ or AM for short.

We have one very handsome son, who isn’t shy at all, but in the interest of keeping his father’s comfort zone intact, let’s refer to him as ‘the Boy-Child’ or BC. He’s about to graduate from his post-secondary endeavors and make his own unique mark on the world. Can you say ‘proud mama keep on bragging’? Okay maybe not.

He’s also tall enough to plant his elbow on my head and I’m no sloutch in the height department. Yikes, how did that happen? He must have gotten that from his father.

But enough of that. Okay what else?

I’ve lived my entire life so far at the foot of the Canadian Rockies, where over the years I’ve tried my hand at several of the fabulous things one can get into trouble with…I mean…do in such an idyllic and majestic place.

One of the first was alpine skiing. There I was looking as svelte as one can in ski pants, boards strapped to my feet, ready to take on the mountain and fly down the slopes with the best of them.

Instead I landed face first in a snowbank when I fell off at the top of the chairlift my first time up. There went my ski pants and aspirations of becoming an Olympic downhill star.

Then a few years later, I met the AM who was an avid dirt bike enthusiast at the time, so naturally, in an effort to impress him with my outdoorsy vim and vigor, I convinced him to show me the ropes. Which he very patiently did.

But in spite of his efforts, on my solo ride debut…I ran straight into the only tree within a two-hundred yard radius. So much for professional Motor-cross.

These and several other stellar moments later, down but never out, I decided I needed to find a less contusion-inducing outlet for my adventurous streak. Either that or top up on the medical plan.

Still, it took until the BC was in middle school before my muse was able to finally get my attention and boot me into having an epiphany. Holy Crap! Why didn’t I think of it sooner? Why live dangerously myself, when I could command my own universe and make some poor character do it for me, so…

I immediately ran out and joined the local chapter of the Romance Writers of America. A wonderful group I’m proud to say I’m still a member in good standing with, also serving four years on their board including a term as president. A place where I learned how to get the voices in my head onto paper in a way someone else might actually want to read from people who were doing just that.

Tah-Dah! An author is born.

Oh, and (most importantly according to her) I’m the rightful possession of a feline with small cat syndrome named Twitch.